Order by 1pm for same day shipping. Free delivery on UK orders over £79

The UK has just experienced one of its wettest and mildest winter on record. An abundance of f

resh water and above average temperatures means an ideal environment for mosquitoes. But it’s not just the rural areas that suffer. Mosquitoes are encroaching ever closer and make their home in sub-urban and urban spaces.

Following a number of glorious summer days interest in mosquitoes is once again peaking if some recent articles (Express; BBC, The Guardian) are anything to go by. While I certainly believe that some apprehensions are justified I also believe that scaremongering does not help. Let me share with you what I’ve recently talked about at one of our in-house awareness-raising sessions.

Know your Mosquitoes – why?

Because mosquitoes are insect vectors responsible for the transmission of parasitic and viral infections, some of them potentially serious. There are 33 species of mosquitoes in the United Kingdom. Most of them are rather small and – so far – qualify as a mild to moderate nuisance. But things are changing. 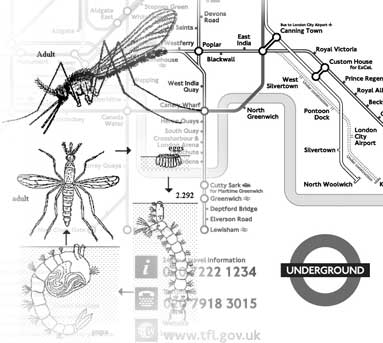 The common house mosquito Culex pipiens (small, beige/brown 3-7 mm body length) is a biter and well-established. The aptly named subspecies Culex pipiens molestus has adapted to life in the underground – the London Underground and other underground railways. It is known as a vector for meningitis and urticaria and has recently been identified as a potential vector of West Nile Virus (WNV).

Anopheles plumbeus (small, slate grey body, potential WNM and malaria vector) is a tree-hole mosquito but is changing its habitats to now also breed in man-made water containers. It is a persistent biter with peak activity at dusk, entering houses with a preference for mammals including humans but will also bite birds.

One notable exception to the native small mosquitoes is the comparatively large ‘Banded’ Mosquito Culiseta annulata that has a nasty bite but is otherwise considered harmless so far. Problem is, it can easily be confused with the more worrisome Asian Tiger Mosquito Aedes albopictus so here is a quick comparison:

Some see the brewing crisis as a war between mosquito carrying diseases and man, a war that supposedly can be won by ever more powerful poisons or clever biological engineering. I’m thinking: “would be nice if it were that ‘simple quick’ fixes can be found but people’s behaviour also are inextricably enmeshed in this. Mosquitoes and people, we all share this planet and go about living and surviving. It’s actually more complicated.” I think my views tie in with those of Bill Gates whose work with malaria prevention I admire. He recently tweeted:

Do read his inspiring blog ‘gatesnotes’ but here is a quick summary of why human behaviour matters:

Earlier I mentioned the Asian Tiger Mosquito and here is why I think there is reason to worry (but not panic!): in the mid 1980s, the Asian Tiger spread from Asia via the tyre trade to the US and within 20 years is now firmly entrenched across many states. All efforts at control have failed. It was introduced and took hold in Italy and Southern France, spread into parts of Switzerland and found it’s northernmost habitat in the greenhouses of Holland (red areas on the map above). Seen in this light you will agree that the Asian Tiger is rightly listed as one of the 100 top invasive species and has to be taken seriously. It was responsible for

No reason for Panic – but a real need for Vigilance!

People live longer and travel – much more so than mosquitoes. So, if you’ve just come back from an amazing holiday and don’t feel so well get it checked out quickly and thoroughly. Transmission of disease all starts somewhere and you don’t really want to become known as patient 0.

Avoid having open sources of stagnant water anywhere around your house, terrace, patio or garden. Inspect often. While the Asian Tiger has not yet been officially reported in the UK, it is perhaps just a matter of time especially with our ever warmer and wetter climate.

Catch them and report them to Mosquito Watch by the UK’s Health Protection Agency and the Chartered Institute of Environmental Health.

What else can you do? Stay covered, especially around dusk. Use insect repellents. Sleep under a mosquito net – still one of the best and simplest options. For ideas, check out our popular Travel Supplies Section.

Have a great week ~ Monika

Tweet
thank you for sharing and helping raise awareness.

Latest map on the presence of #AedesAegypti in #Europe, a mosquito which can transmit #Zika https://t.co/UWn1JPdg1d pic.twitter.com/6aNKvWxW1d

29 thoughts on “Mosquitoes – Harmless Nuisance or Threat in the UK?”