Back in October 2015 I first introduced you to UK Community Resilience – a brilliant example of what really works and a follow up of the project. Several seasons of storms and flooding later as well as post 2016 National Flood Resilience Review, it’s high time I update you on progress, for much has indeed happened at North Yorkshire Resilience Forum (NYLRF) to raise community resilience and get people better prepared.

The pilot project originally started with 11 trail blazing communities two years ago reaching around 22’000 people. Now take a look at how this project has grown to include all these communities: 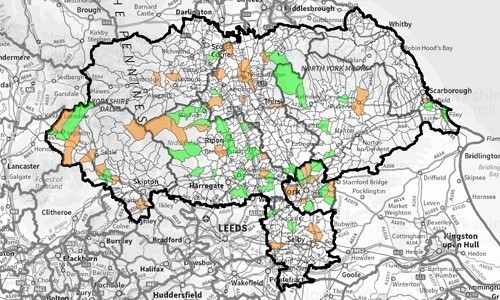 One of the communities that has been on board since the word ‘go’ is Tadcaster Flood Action Group. They have a brilliant website and are also on twitter @TadFloodGroup and  facebook so check them out. 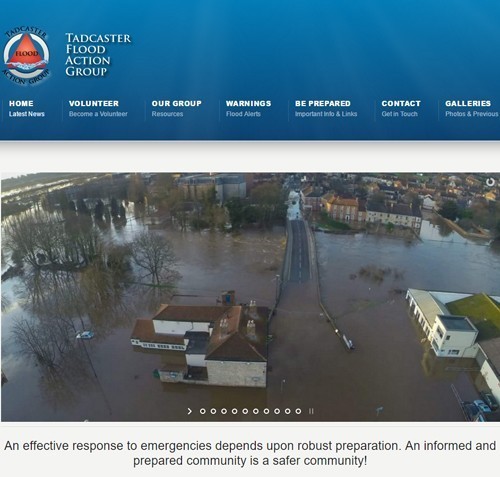 Their team of dedicated volunteers simply do amazing work and have vast experience since their town was divided by the famous bridge collapse thanks to the terrible 2015 winter storms namely Storm Eva and Storm Frank.

This year, to raise awareness even further, Tadcaster Flood Action Group is planning a bi-monthly newsletter distributed via the website, email and leaflet drop at properties at risk in Tadcaster and I for one cannot wait to see their first edition. Networking and organising local evens are, naturally, also on the agenda and they work with communities such as Ulleskelf Flood Action Group, Newton Kyme and Kirby Wharfe, sharing knowledge and experience to keep communities safe from flooding and build community resilience.

Community Preparedness Kits form one important aspect of the NYLRF Emergency Plan Scheme (together with plans and training), providing tools and resources to those on the front line.

“The community resilience kit which we received has been absolutely fabulous and is a kit that we have in our central base. It simply gives the group peace of mind and a preparation tool having it to hand.”

“The success shown by communities such as Tadcaster is helping to promote this scheme to other communities across the county resulting in a rapid upturn in community preparedness. The added incentive of a free emergency kit is definitely a bonus.

We have a number of events planned across the coming months to promote the scheme further and long list of communities wanting to get up and running with a plan.”

In addition, another recent successful example, Ingleton, has been reported in the press: 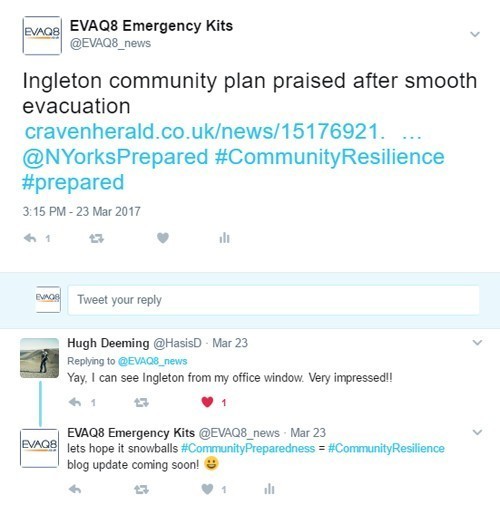 But it does not end here. In addition to Flood Action, I want to also tell you about another NYLRF collaboration to tackle community resilience from yet another vital angle: mental health. Meet Alex Sutcliffe and her Major Incident Response Team (MIRT) who will offer support in the aftermath of a traumatic incident such as major flooding to help those who may have been affected:

Meet the #MIRT volunteers – a very special team of volunteers for North Yorkshire and York helping those in trauma pic.twitter.com/Jo4Z836LRr

We love our kit bags, they are invaluable. A portable rest centre in a bag! Thank you @EVAQ8_news

Find out more about what they do on the Post Incident Support page on the NYRLF website and keep your eyes on this blog which will soon post more about  @alexsutcliffe24 work who explains:

“The MIRT team are a very special team of volunteers who are always ready and willing to be called out to support communities or individuals through a traumatic experience.  We do this by offering emotional and practical support, whenever and wherever it is needed.  The MIRT bags from EVAQ8 have been invaluable as an additional resource to allow the volunteers to be prepared and raring to go with ‘life essentials’ and short notice.
When communities or individuals need the assistance of one or more of the MIRT volunteers, it is at a time when they are at their most vulnerable.  Being evacuated from your home at short notice can leave you feeling very vulnerable and ‘out of control’.  The skills of the MIRT team, ensure that anyone in our care is well looked after and kept safe until such a time that they are able to return to their own homes.”

The creation of this special team is a UK first and so all must be hugely congratulated for getting this off the ground.

#MIRT training #ReadyforAnything volunteers in the City of York. Thanks to York CVS for establishing this group. pic.twitter.com/DbvrZQZHBm

Building community resilience in the UK remains a top priority and the NYLRF model approach is a brilliant example that works.

Hazards and risks are many, not just flooding as we are preparing for a world that’s a least 2°C warmer.

Clearly, Resilience and Preparedness roadblocks  have not damped the spirits of the many dedicated emergency planners and volunteers that make it happen in Yorkshire. It is my sincere hope that their example will go on to inspire many. Why not consider starting a Flood Action or Community Preparedness Group in your area? Get in touch with your Local Resilience Forum and find out what opportunities there are.

Be prepared – not scared!